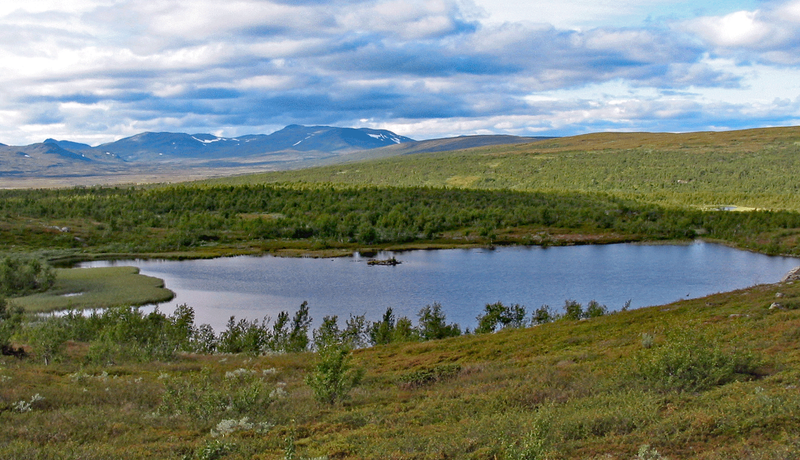 Trekking round the main massif of Ammarfjäll

The Ammarfjäll are part of Europe's largest nature reserve the "Vindelfjäll Nature Reserve". The tour leads once completely to the reserve's main zone. Who wants to take it slow and enjoy nature should allow 6-7 days for this tour. The simple cabins are in daily intervals along the way, sometimes just 10 km away. Some lodges are open all year, while others have to buy a key at the hotel "Ammarnäsgården" before the tour   starts. 2012 two new guest cabins for 6 persons each were completed. Owner is the country 'Västerbotten'.

The first section to the hut at Dalovardo is an old trade route which was used in previous centuries by the locals to deal with Norway (Mo i Rana) exchange goods. Here Sami hunters and trabbers have brought their catch over the border and taken on the way back flour and sugar. Reconstructed stables at strategic places demonstrate that horse and rider have stayed here.

For centuries it was called 'Josefsleden'. In 2012 he was re-established as a new cross-border hiking trail to and from Norway and it's now called 'Vindelvaggileden'.

Start and end point of the round is the Sami village Ammarnäs. The route follows mainly along the two rivers Vindelälven and Tjulträsket. In so-called. Ammarnäsdelta meets both rivers, coming from the north and from east. The tour can be started along rivers in both directions. Mostly, however, we go upstreams the Vindelälven, so the Ammarfjäll is circling counterclockwise.

The first day's stage runs along the Kungsleden north to Rävfallstugan. (See hikung: "Round trip in the Nature Rersere Vindelfjäll"). Nearby the cabin there are several nice campgrounds. Visitors who have booked an overnight stay in the cabin can use the cozy wood-fired sauna by on the riverside (wood is available but it must be cut and split by themselfs. Saw and ax exist)

On the next day the path continues northwards towards Norwegian border. After the cabin at Vitnjulforsen (bridge with interesting photographic motifs) the Trail turns to the west. Soon we reach the new hut at Mankeforsen (take key from Ammarnäs).

After the next hut near the mountain Dalovardo we leave the Vindelvaggileden, cross the river which has accompanied us the last few days and turn sharply to the south. Left of us now rise the more then 3.000 ft mountains of the northern Vindelfjäll. Over several watercourses (small bridges) we reach the magnificent lake Tärnasjön after two days. Where we meet the Kings Trail (Kungsleden) coming from the south. We follow this in an easterly direction. Now the trail leads up into the mountains with beautiful views. At the end of the stage we come to the Servestugan (STF cabin, 30 accommodation places, open June 20 to September 21). The further way to Ammarnäs follows the Kungsleden and it's accurate described in the trekking tour "Around Tjulträsket".

Only on the first day and after the lake Tärnasjö longer ascent on the Kungsleden into the highlands. From Rävfallstugan largely valley walk with easy up and down. The challenge arises through the backpack weight because of all food must be carried. Last supermarket in Ammarnäs.

Especially in the pre-season (June) is much meltwateron the trail, so waterproof footwear is essential. In many places marshy. In the fall (September) first frosts may occur. There is enough fresh water on the trail.