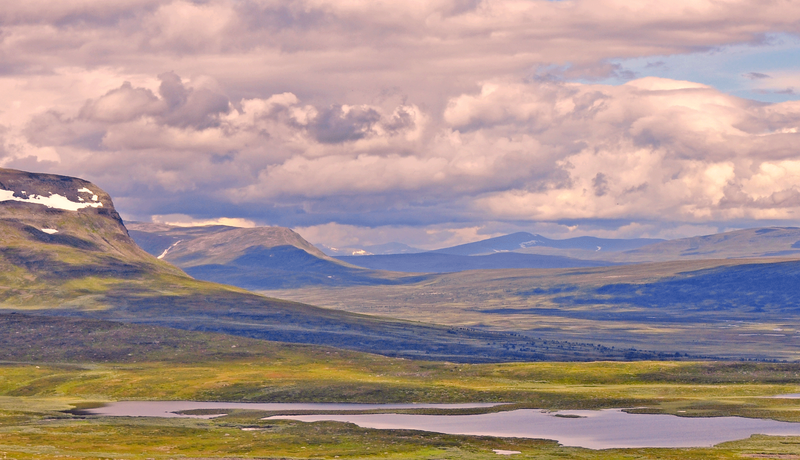 On Kings Trail from Hemavan to Ammarnäs

In Hemavan begins (or ends, depending on the direction from which you come) the northern Kungsleden (Kings Trail). With 270 miles it is the longest-distance trail in Scandinavia and one of the most famous trekking trails worldwide. The Kungsleden was established at the beginning of the 20s by the Swedish Tourist Association (STF) and opens for the hiker the natural landscapes of Lapland.

Main hiking time is July / August. During this time you meet trekkers from around the world and the cabins are more frequented. The first section to Ammarnäs is characterized by a glacial valley. The ice has formed the highest mountains of the Vindelfjäll nature reserve.

The tour begins in Hemavan. The trail initially runs through birch forest upwards, but soon goes in the valley of Syterbäcken. The STF cabin "Viterskalet" is the next target. A stop is worth: You find here the best waffles in the region! Shortly after the hut you have to decide whether the highest peak of the nature reserve, the Norra Sytertoppen (5.800 ft) to be included in the tour or not. If you decide to go you have to cross the creek Viterskalet and follow the footprints to the steep climb. A broad back passes to the summit. Shortly before an old restcabin. The descent takes place between the two glaciers to the Northeast. Who wants to stay in the valley, however, continues on its way through the huge canyon which runs between the northern and southern Sytertoppen. At the exit of the valley there is a small cabin for herdsmen (emergency telephone!) After a few hundred meters the Kungsleden turn to the northeast to the next cabin "Syderstugan".

The more common way now runs through swampy terrain to the lake Tärnasjö. On its eastern shore to STF cabin "Tärnasjö" and further via "Servestugan" and "Aigertstugan" to Ammarnäs (total 44 miles).

Challenging tour, especially when climbing the Norra Sytertoppen. Steep ascents and descents. If you want to install the ascent as a separate event you can deposit some of your equipment in the "Viterskalstugan" and return there after the descent.

It is recommended to go even in the summer on the glaciers by special equipment (ropes, harnesses, ice axes).

For trekking normal trekking gear is necessary. In the high season it is advisable that you carry a tent because the cabins can be occasionally occupied.