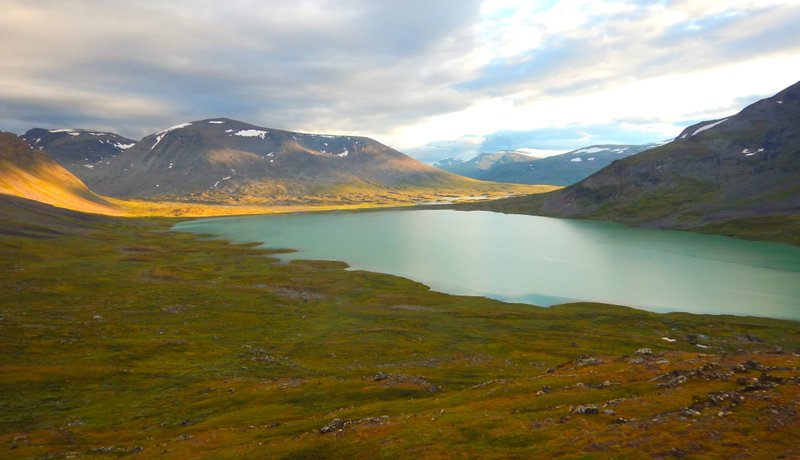 Uniquely beautiful day trip through all vegetation zones of the mountain world. Absolute space and solitude in the highlands alternate with rushing streams and subalpine birch forest.

History: The church was built between 1936 - 1938 on the initiative of Göte Haglund, at that time pastor in Ammarnäs. The funds for the church were donations of the local population; but critical was an anonymous donor of 12,000 kr The precondition was that the church should named to the 1930 late Queen Victoria of Baden (Germany). It later turned out that the anonymous donor was the former royal court doctor Axel Munthe Fredrik Martin. The church stands on a fantastic place on "Överst Jukton". In the time of construction, however, it was 60 km away from the nearest road. Today a small road leading to the church.

The maintenance of the building has become the parish Sorsele to a financial problem, so they searched for a buyer a few years ago. Now a new owner has been found. Services are held 3 times per year during the summer months. On other days the church is closed.

The tour begins at the Viktoriachurch on Överst Juktån. Behind the church we follow a significant footstep in the arctic birch forest. On small bridges the romantic path crosses several creeks with crystal clear water and we slowly gain altitude. Before we leave the birches we raced on a dreamy stream and fill the bottles with clear mountain water. After lunch we continue our hike up to the dwarf birch. After about 3 hours we leave the tree line behind us and enter the highlands. The trail now runs well with old stone slabs marked in a northwesterly direction. The highest point of our journey, we reach on a nameless hill at about

2.900 ft above sea level before it then goes down again. Here we have a magnificent view of the surrounding mountains and in the distance we can see on a clear day the lake Gautsträsket. Ahead of us lies, still 2 hours away, the green valley of Vindelälven. We hold for a while at Gautsträsket but then turn right again into the birch forest. Moving forward we reach an old Skotertrail which leads us to a small forest road and continue descending to the end point of our tour in Kraddsele. From here we will be picked up.

Go with a light pack in roadless terrain for a long time must be ensured.

Sturdy hiking boots, wind and rain protection clothing essential. From September additionally hat and gloves. Food for a whole day. There is plenty of water in the first and last section of the walk.