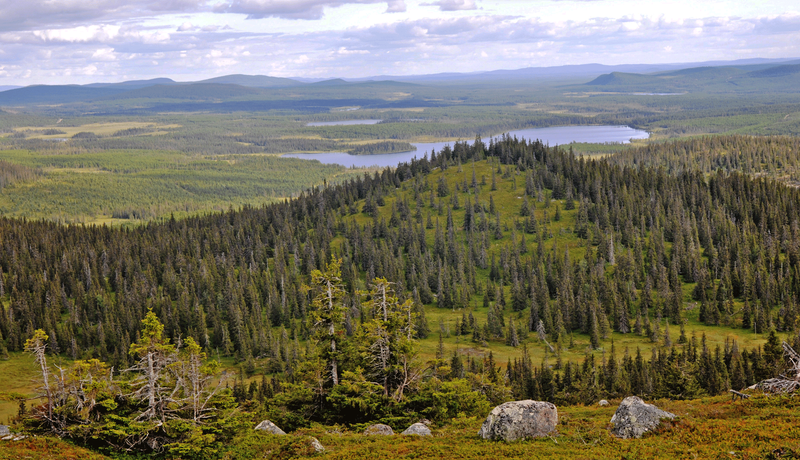 Round trip in the highlands

Easy hike with highland feeling. Grandiose views of the summits of Vindelälvs Nature Reserve. On the way back the trail leads through pastures with high Moosedensity. Side trip to mighty Gouletsbäcken Waterfall possible.

Tour start is at the parking lot north of the village Ammarnäs. From here you put on your walking boots. An old trade route, on which in former times goods were exchanged with Norway, leads us into the valley. Even from a distance we hear the spectacular waterfall where the river Gouletsbäcken comes from the highlands. After 3 km we turn right into the underbrush and climb up to the waterfall. Later we achieve something steeper terrain. Above the waterfall the time has come for a first break. The view allows us a splendid view of the highest mountains of the nature reserve Ammarfjället with the sloping walls of the southeast Stuvbiebáktie (1251 m) and Suvlåjvvie (1352 m) and in the background of Vijjágáissie (1444 m). After the break we leave the tree line below us and come into the highlands. We follow a while the footprints along the Gouletsbäcken until it loses in the vegetation of the highlands. In trackless terrain we turn off to the southeast and cross several streams. Later before we cross the impressive suspension bridge over the Lisvuojuhka. (The nearby cabin for rendeer breeders on the south shore of the lake Lisvujávrrie is closed to tourists and can not be used as an emergency shelter.) After about 1 hour we reach the lake Dávtájávrrie where we take a longer rest if the weather is suitable.

Now we follow the quad trail of reindeer herders  to a sign which shows us the descend into the valley. The footstep is sometimes not easy to find. Last we are going over a wet meadow (in spring with flowing streams) to the mountain road to Biergenis and this down to the parking lot.

The tour needs no special requirements. But prolonged walking with light luggage is necessary. As you descend into the valley of Vindelälven it may be slippery after rainfall.

Sturdy hiking boots and rainwear are needed. In June it may be possible that we have to go some sections with snowshoes. In August, however, you can bring a towel with you and go swimming in the lake Dávtájávrrie.

Your Guide in Lappland